The role of a critic at a music festival is a tricky one.

Why, I hear your heart bleed? Well in the words of Mark Kermode, the reviews most people remember are always the negative, highly derogatory diatribes. After all, readers tend to recall if something receives a particularly damning or scathing write up in press, but very rarely get excited by endless praise for an event they were unable to attend.

It’s not surprising. Watching Glastonbury highlights on BBC iPlayer is never as enjoyable as standing in a field, regardless of the cliché mud and rain. Even if you try and kid yourself by drinking cheap cider in your garden, queue 45 minutes for your own toilet, or even position your television 50 metres away so you can only catch a glimpse of the artist, it will never capture the magical atmosphere of being there.

So, back to the review. If anyone attending Common People came away without thoroughy enjoying themselves, well, it’s unmistakably their own fault.

They can’t blame the lack of sleep – there is no camping available or fields of tents to search for at midnight.

They can’t blame the weather – no need for wellies in the city centre, but two days of sunshine may have led to crisp burning in the sun.

OK, they could criticise the lack of lager on Sunday evening when it sold out, but then, they really should have been enjoying one of the fine real ales on offer.

They most certainly cannot blame the organisers or security. Lou the rather large gentleman at front of crash barriers redefined customer-service as he took selfies for crowd, had his brow mopped by artists, and was even serenaded by De La Soul and the compere.

So, all this reviewer has left is to whinge about were the queues on Saturday entering the festival gates, where 30,000 lucky party dwellers headed for two days of festivities.

There was enough variety across the stages to keep young and old singing, so if you didn’t like what was on the main stage, well join the party in the Big Top tent instead…so here’s the unapologetic positive highlights:

Fresh from being shortlisted for the Critics Choice category at the 2015 Brit Awards, George fortunately didn’t bring his book of Keats verse with him – instead he proceeded to use street savvy rap to highlight social injustice, austerity and the reality of growing up on estates in dark side of London. With such acclaim coming his way, who knows, he could become a household name in the style of Dizzee Rascal or Tinie Tempah. 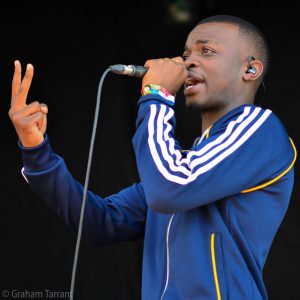 Mr Skills came on stage wearing what can only be described as a pair of pants disguising his face. Fortunately, his funky music was anything but and kicked the afternoon crowd into a dancing frenzy. Mixing eclectic television themes with dance milestones from Adamski and Faithless, even the Daily Mail readers in audience could have been raving – it was truly difficult to tell with everyone waving their hands in the air, like they just don’t care. 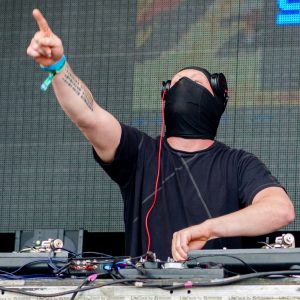 Similar to Jaguar Skills with his cut-and-paste trademark style, Yoda mixed Mr Men, Sesame Street and other Looney Tunes for children young and old. Along with his new album (appropriately titled Breakfast of Champions for those tucking into bacon rolls), he cut tunes from Marvin Gaye, Prince, Mark Ronson and even squeezed some juice out of George Formby. From the beaming smile on the Jedi Master’s face, it was clear he was enjoying spinning his mixes as much as the young padawan’s watching. Surprisingly, and slightly alarming, the biggest cheer was received when he played Livin’ On a Prayer…enough said. 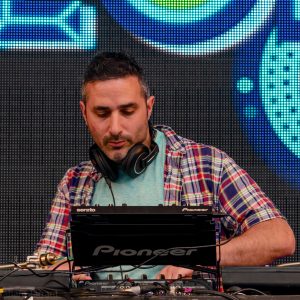 With their skits, Plug One and Plug Two engaged with the crowd and their enthusiasm was so infectious, even ‘Lou the Security Guard’ joined in with the party…unlike other key rap artists who gravitated towards fake machismo and gangster pretentions, De La Soul made sure there was no need for parental advisory notices, bring their D.A.I.S.Y. age (short for “Da Inner Sound Y’all”) to the park – they even played ‘Roller Skating Jam called Saturday’ from their classic album which summed the vibe better than any reviewer could. 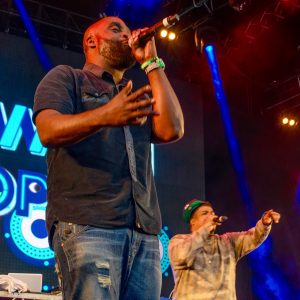 Their routine has been mimicked and copied many times since their timeless debut, which incredibly is now over 25 years old. No wonder the likes of Gorillaz asked to collaborate with the trio.

It goes without saying the main reason why this event was so well attended by so many of all ages was primarily to see the headliner. You could only feel sorry for those musicians booked in same slot on empty stages elsewhere as everyone was here to see the superstar DJ. 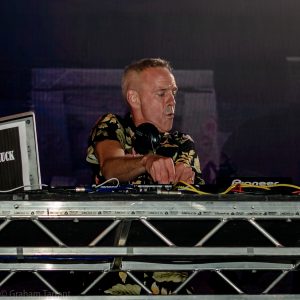 Norman silently took to stage in disguise, soaking up the atmosphere while allowing his all-female choir to take the limelight. He’s come a long way but everyone was glad he was Right Here, Right Now. As well as his own tunes, he threw in a few banana skins, such as Underworld’s ‘Born Slippy’, Basement Jaxx’s ‘Where’s Your Head At?’ and even mixed the Pulp classic, ‘Common People’.

Norman remains one of the most down to earth DJ’s, highlighted by sticker ‘Common as Muck’. Praise You indeed. 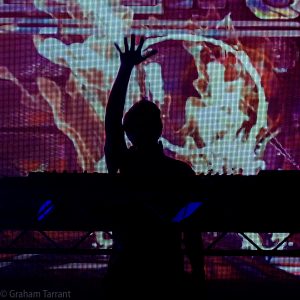 The Common People re-emerged slightly jaded from the night before, and full of Red Bull (other energy drinks are also available which can give you chronic chest pains as well as wings). The sun rose to grace the city despite the BBC forecasters promising thunderbolts and lightning, very very frightening – fortunately, there were no other Queen references and only the slight drizzle in early evening to sober and refresh the crowd after The Cuban Brothers made everyone feel slightly dirty.

Sweating in the aforementioned early morning sun like a janitor from outer-space, Craig carried his bulging trunk-of-funk from Coronation Street and proceeded to set a high bar for other acts to follow. He clearly got his James Brown groove on, frequently mixing favourites from the Godfather of Soul, with Stevie Wonder, Marvin and even I Am A Man of Constant Sorrow – oh brother.

While on 6 Music, the listener can hear his enthusiasm for timeless ‘proper’ R&B, the actor-cum-DJ left the crowd in no doubt of his love of the greatest records ever made with his smooth moves in front of the decks. 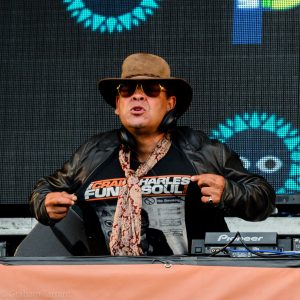 Craig Charles may have been one tough DJ to follow, but these fun loving crude dudes made sure that no others could come on stage and simply spin a few records. Whereas De La Soul played an evening family friendly slot, the same could not be said these uncouth communist state brothers. 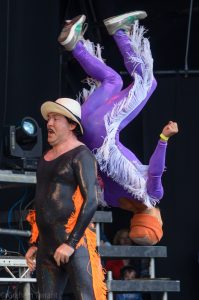 Turning the sky even bluer with their innuendo, mothers desperately covered their children’s ears while singer Miguel Mantovani threatened to impregnate parents of both sexes with his loving. All round show-offs, but with an impressive Cuban cigar worth of talent, the unprepared crowd were treated to an extra large portion of funky beats and hip shaking fun. If the throng was shaking their hips, it was in a pretty confined square of grass due to amount of people their antics attracted – as well as the tunes, the breakdancing, head spinning, somersaults had to be seen to be believed.

Just when the crowd thought they’d seen it all, the brothers introduced their newest member, in all senses of the word – ‘Mr Juan Erection’ – maybe he could join the X-Factor band as a replacement for Zayn Malik as he certainly had the moves. An enjoyable novelty festival band, but please next time, remember to leave the innocent kids safely at home…or visit one of those other stages. 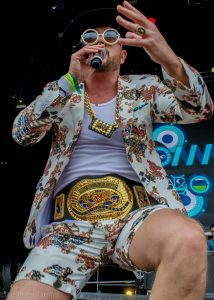 As local co-founder of Bestival and curator of the weekend’s festivities, Rob proved a colourful free spirit. Combining all his experience into a leftfield mix of techno, house, and jazz infused bootleg beats, the crowd were appreciative of their festival organiser. A miser of steam remained visible from outside the big top tent as the sun set and red sky appeared. 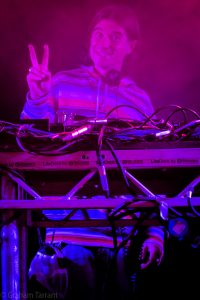 The Rising are a prime example of Southampton’s confident rising music scene. With indie based guitar music becoming stale, recycled and insipid, if you want to make it, you need attitude, personality and passion to stand out. These young lads certainly had an oasis of that

The band wore their influences openly on their record sleeve – in opening number , singer Tommy sang how ‘no one’s gonna stop me playing my Small Faces and my Kinks CD’s’ – surely it should have been a vinyl collection for all the vintage swagger. 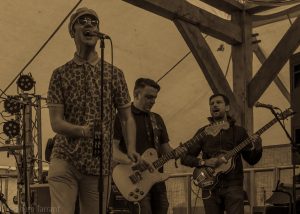 Fresh from playing the BBC Big Weekend festival in Norwich earlier, Clean Bandit were full of energy despite two shows in a little over six hours, making clear in their mantra that it just made them ‘Stronger’. The quartet took to the main stage to a huge crowd who loved their catchy club classic pop tunes, fused with classical string mix of violins and cellos. Playing club classic ‘Show Me Love’ and finishing with their No. 1 single, the audience and band made clear there was no place they’d ‘Rather Be.’ 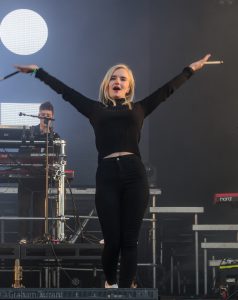 After announcing the Sunday headliner later than the rest of the lineup, many ticket holders let out an unwelcome sigh of apprehension at what they could expect. Was a 67 year old Jamaican model really the right choice to close the weekend?

Well emphatically the answer was, a big bold YES. Without a glimmer of a doubt, despite all the glitter and glamour. Described as coming on stage ‘dressed’ like a skeleton by some, she was far more exposed than that. All clothing had all been left backstage. Wearing only the smallest thong and body paint, she enthralled the unexpecting audience which suddenly felt a lot warmer than their singer must have been in her underwear. 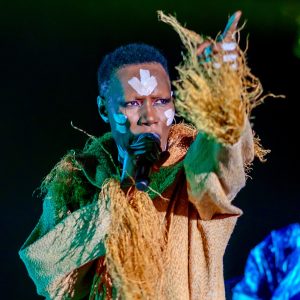 Madder than the bag of badgers possibly used to make her head pieces, she cut straight through the feisty steely persona, and smiled her way up and down the stage, making quips with her own male pole-dancers. If there was ever someone who could use the term Girl-Power, it was this fine lady.

With more costume changes than you can count on your fingers, each one more dazzling than the last, she descended off stage onto her burly bodyguard’s shoulders and literally Pulled Up To The Bumper of the crowd shaking hands and placing her exposed body to one too many gropes. If you have met Miss Jones, you certainly would remember.

Finishing the night with her trade mark hula-hooping skills, the audience was entranced as a slave to her rhythm. 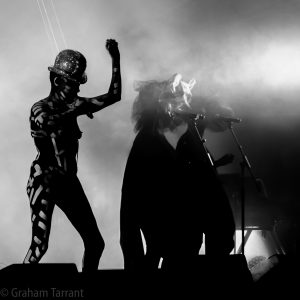 So in conclusion, an undeniable positive review. At only £30 for each day ticket, why not? Many individual bands charge more than this to see them alone for an hour or so, whereas the festival offered over 12 hours of shenanigans. With so many acts on offer, from rock, indie, pop and dance performers, if there’s something you didn’t enjoy, you’d be pretty narrow minded to stick around and watch it and not fancy something elsewhere in the festival – even if it’s a trip to Pie Minster for their Mothership meal deal. 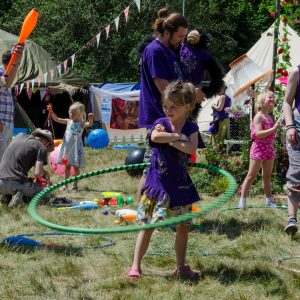 If there is a need to be balanced or critical, it’s the fact that festivals these days seem to cram in so many different stages which artists you want to see, all clashing at the same time – don’t they realise you can only be in one place and can’t possibly split yourself in three?

Let’s hope next year they don’t celebrate their success by announcing even more stages in Southampton to make the choice of acts even harder. Still you’ll never get it right, while you’re laying in bed at night, watching…well watching a festival at home on television is never the same is it?

All words and photographs:

Did you find apk for android? You can find new Free Android Games and apps.
This entry was posted in Uncategorized.